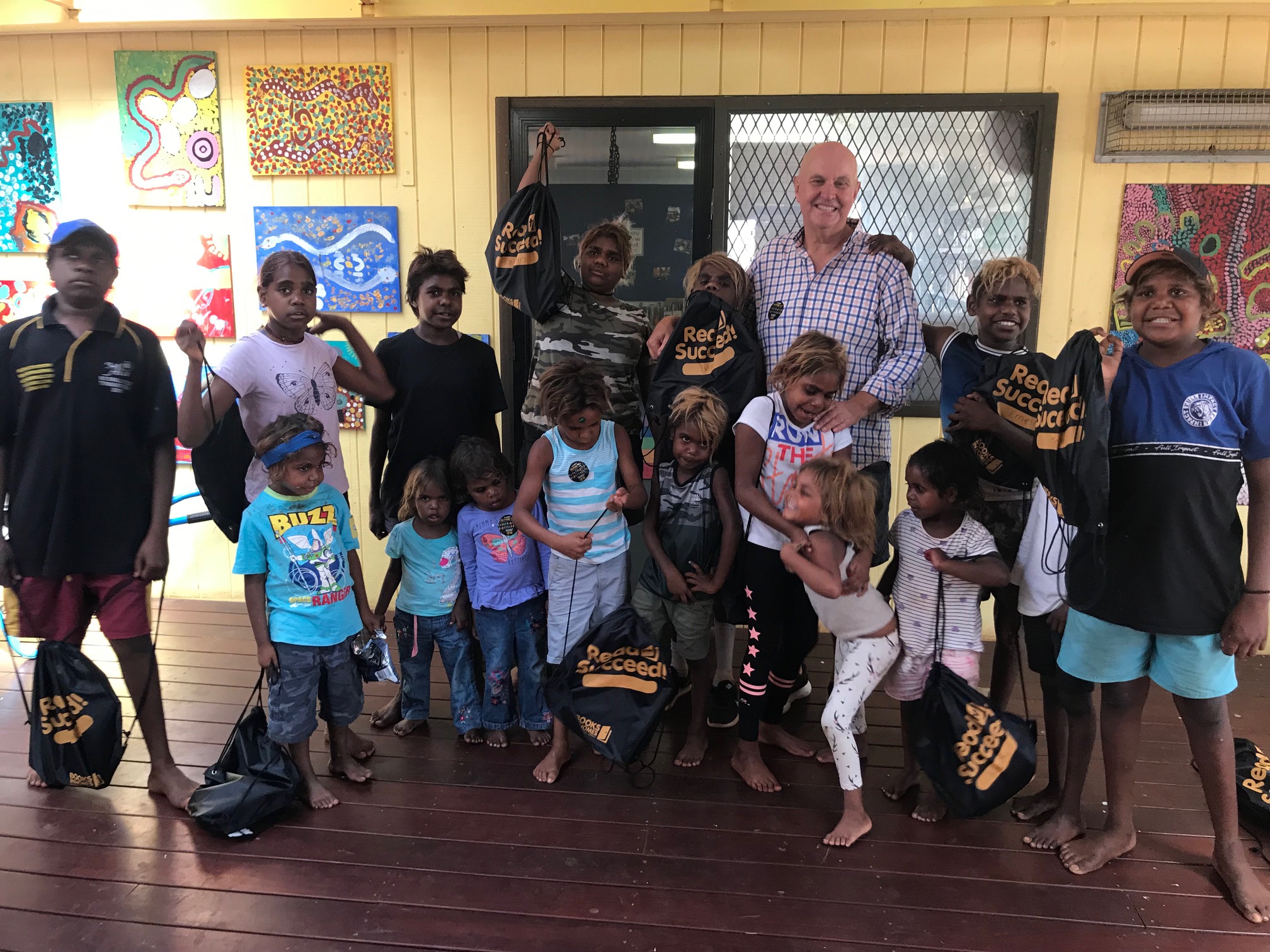 Here is a report from his recent trip:

If you are trying to find a remote school participating in the Books in Homes Program look no further than the Murputja Anangu Community School. Situated in the far North West corner of South Australia, not far from where it intersects with the borders of both Western Australia and Northern Territory, it’s a long drive from either Alice Springs or Adelaide with plenty of corrugated and dusty roads along the way.

As a long term Sponsor of the Program for babies through to primary kids I thought it was time to find out what remote education entailed and, with my partner Jane, I decided to attend the school’s Book Giving ceremony.

A 700 kilometre drive from Alice Springs via Yulara and Uluru took in some spectacularly breathtaking scenery in a dry and arid landscape. There was plenty of wildlife to be seen with camels, goannas, horses, dingoes, kangaroos, and free range cattle wandering the plains.

We arrived at the school, which sat at the base of the Musgrave Ranges, neatly located between the two Indigenous communities it services—Nypari and Kanpi. The two communities have around 40 residences in total with the local shop and administrative services in Kanpi and the local clinic and renowned Indigenous art gallery in Nypari. The local landscape had been blackened by a bushfire earlier in the year which thankfully missed both communities and the school.

The school itself is unique in that it sits outside the communities, and each day the shuttle bus collects kids before school and drops them off at day’s end.

Jane and I were lucky enough to share a ride in the back of the bus to the communities on the afternoon of the first day in the school, with what could only be described as a “buzzing group” all eager to share a story about their adventures, which included chasing wild camels the previous evening.

Despite its remote location the school is fortunate to have permanent electricity and Internet connectivity rates that make the education experience remarkably good. The school is beautifully maintained and provides wonderful educational and recreational facilities for the 23 children currently enrolled. Classrooms are true educational havens, including a wonderfully stocked library. The school also had a fully functional kitchen, which was used primarily to support the nutritional program that provides breakfast, lunch and recess meals.

The students have a wide range of recreational facilities including playgrounds, covered basketball court and a mini AFL field made only of baked dirt and would test the resilience of any player. It didn’t pass my notice that resilience was one of the key values of the school.

The school teaching community is a mix of dedicated teachers and Aboriginal Education Workers (AEW). It’s a real family affair with Principal Luke Carter, and his wife Cailin, the Early Childhood Family Centre teacher. They were supported by the Teaching and Learning Coordinator and Books in Homes Coordinator Kasey Ball and her husband Josh who taught the senior school students. These four remote warriors have been at the school for almost four years and in that time had developed a strong bond the with the children, which appeared to be wholeheartedly appreciated by the students and parents. The other primary school teacher on site was Minni who had only flown into the school that week. She was accompanied by her mum who had travelled from the Punjab, India to support her daughter and who was still coming to grips with the different environment.

Teachers were ably assisted by Astrid, whose husband is the local police officer, and who does everything from administrative support through to providing the catering and doing some impromptu carpentry on Ceremony Day.

The role of the AEWs is pivotal in the provision of quality education, as they provide the cultural awareness and communications bridge to ensure students and teachers are engaged and maximise the outcomes of the education process. To that end, Therese, Joseph, Serena, Kani, Celena and Tanya need to be roundly congratulated for their input into what is a safe and welcoming community environment.

We were hosted at the school for two nights in very comfortable converted dongas, which were  ‘little oases in the middle of the desert’.

The Booking Giving Assembly was incorporated into Harmony Day celebrations and an enormous amount of planning came to fruition.

Before the ceremonies started, Jane and I were privileged to sit in classes and actively participate in lessons. For some reason my bald head became the centre of attention and I was subject to a constant head massage.

Jane participated in the class with early childhood students and was chuffed with both play and life skills being embraced as part of the kids’ lesson.

I realised just how remote the school was when I had to play postman and wait for the mail  plane to make its weekly delivery at the airport, which had a herd of camels as the only other spectators. That was followed with a visit to the local General Store which services both communities and relies on twice weekly supply deliveries. The bus from Alice Springs operates on a similar timetable. The harshness of the community was reflected by Kanpi families having no water for the two days we were there due to marauding camels damaging their bore pump.

The day turned into a rich cultural experience with the students, family and educators enjoying a range of activities. Everyone had access to a plethora of computer images and photographs, which they were able to use in the construction of family trees and also family photo albums.

With the local Nypari community being home to famed Indigenous artist Theresa Baker and many of her equally skilled cohorts, it was inevitable  that some students and families chose to represent their family history in art form. The works of all ages was simply amazing!

A highlight of the day was a traditional storytelling ceremony conducted by a member of the local community.

The Book Giving Assembly was very rewarding, especially when many of the kids picked up their BBQ lunch and then their book bags and read their books munching away at their sandwiches. Those actions in themselves made me realise why I enjoy being a Sponsor of the Program.

I would like to thank the entire school and local community for presenting us with a unique experience that will be fondly remembered. Hopefully this initial remote sojourn will be the impetus for me to visit the other school I sponsor—the Dawul Community, which is 150 kilometres south east of Kununurra in Western Australia.